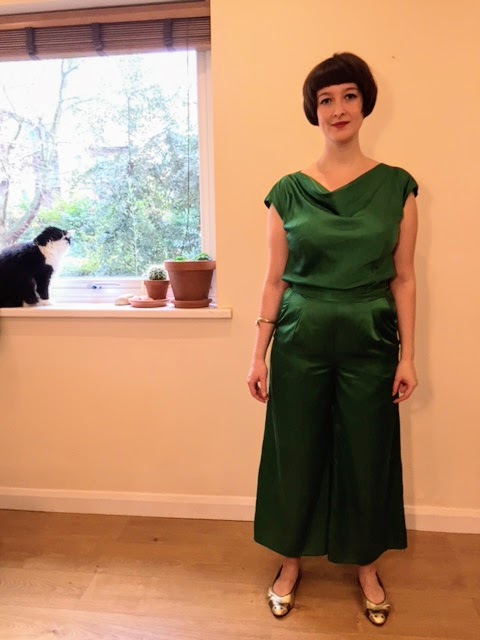 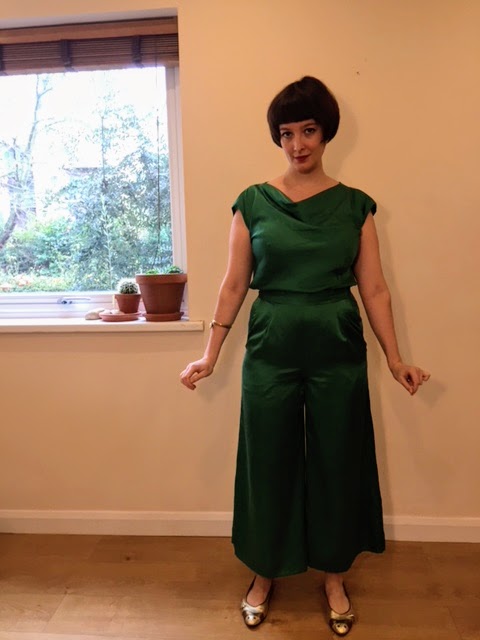 I've been working on something rather special recently, and while simple a little more involved. This is an outfit made especially for my friends' wedding where the dress code was "smart but colourful". I'm not sure how smart this is, and it does definitely feel and look like luxe pyjamas, but it is colourful! I wanted the jumpsuit look, but without the impracticality, so decided to match up the Flint pants with a drapy cowl neck top discovered in the back of my Famous Frocks: Little Black Dress book. 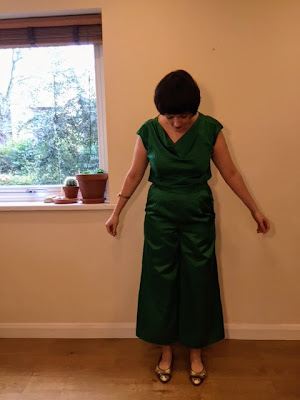 I've been hoarding this emerald green silk from Goldhawk Road for ever (although I feel like the last time I was in Classic Textiles it was still there). I had initially intended to make a Colette Licorice dress, using the matte reverse of the silk, but went off the idea (I'm still torn about whether I want to make that dress- maybe in a dark crepe with full length sleeves and no waist tie it might be more me?). 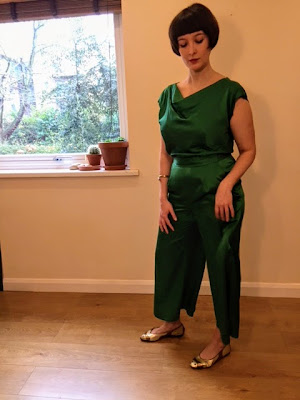 I was debating whether to use the reverse for this outfit too, but the idea of special occasion shininess won out. I've not worked much with silk before; the one time I did it was raw and slubby so the rougher texture made it easier to cut and handle. This time I tried to follow all the best practice tips out there: I starched when ironing to lose some of the slipperiness; cut everything out on a single layer using a fresh rotary blade in my cutter; I bought some silk pins especially and used the tissue paper method to stop the seams slipping through the machine (which was equipped with a fresh and fine microtex needle). 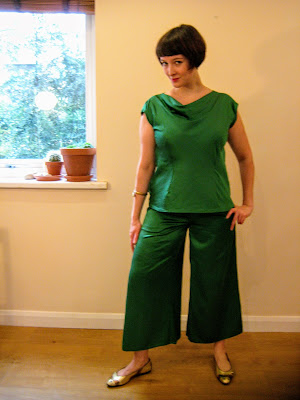 I French seamed most seams too, although I did use the overlocker where necessary but I'm not as keen on this finish as the navy thread looks a bit shoddy, but I wasn't going to rush out and buy 3 cones of matching green thread - especially when I'd bought the original thread ages ago with my original sewing plan in mind. I tried to avoid handling the pieces too much as well to minimise distortion (although I'm sure there was some). I think all this worked in my favour, but I may have stretched out the back neck a little for the top. 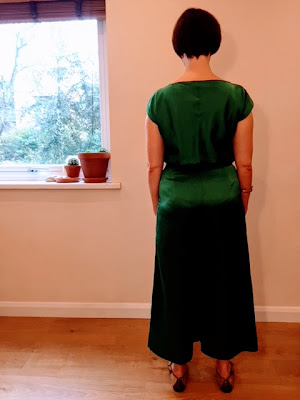 These are the Flint pants, which I chose for the luxe Miss Fisher-esque 20s pyjama look, but also because I thought my first go in silk should be in a relatively simple pattern that I'm confident with the fit. This is the flat waistband version, but instead of adding buttons I decided to sew in four tiny polyester snaps to keep the front smooth and avoid any pulling. I made a couple of tiny tweaks - one to add more space over my "rump apex", another to pinch out a swayback ripple just under the waistline, and another to smooth the rear crotch curve. I also shortened the legs, but in trying on during construction I preferred the longer length so just did a baby hem to preserve as much of this as possible. 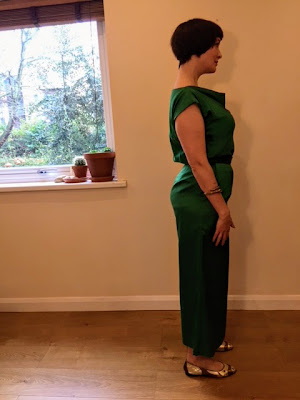 I swear the adjustments I made were tiny, and all but the swayback should have added rather than taken away space, but the net result seems to have been that these are a little tighter than planned! Eep. Not sure whether this is to do with the linen I made my first pair in being more relaxed weave and dropping to accommodate my curves, or whether the tweaks were a bad idea, or the French seams made the fit a little closer; or somewhere between all three! I've not dared to let anything out because of the potential needle scarring on the silk. For my next pair I might add in a wider seam allowance over the hips and see if this fixes some of the other issues...You can really see my belly and bum threatening to bust the seams in the images above and below! The silk does really show everything though, including the pocket outlines in some shots, so I guess I'll have to just suck it up (and suck it in!). 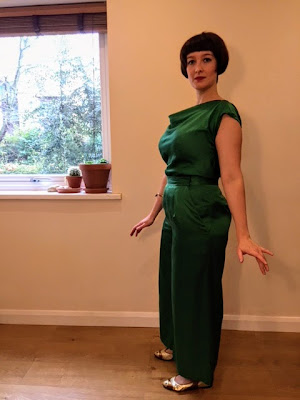 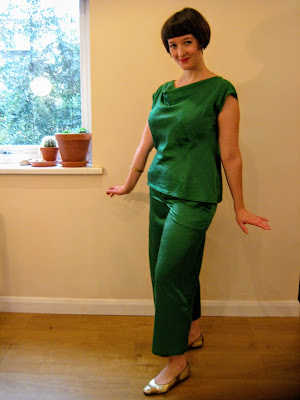 The top is the variation pattern for the  Anjelica Huston inspired dress from the Famous Frocks: The Little Black Dress book and I made no adjustments at all. It's quite loose fitting but in a way that I think speaks to 1920s elegance; plus it's a pull-on top so can't be too close to the body. It's my first ever bias-cut make, and the cutting out was definitely the lengthiest part of the process, otherwise it was very easy and I think quite flattering. I'd certainly consider making it again, and I like the way it pairs with the Flint. 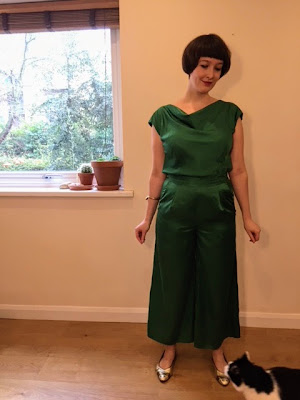 All in all though I am pleased with this outfit, even if I have to remember to suck my belly in and stand very straight! The upside of it being silk is that i could very comfortably sleep in it if I stumbled in late after a night of festive merriment. I'll leave you with my demonic face from the image below, don't have nightmares kids...! 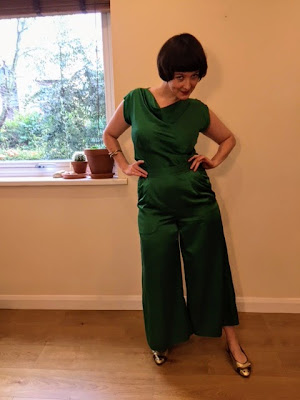 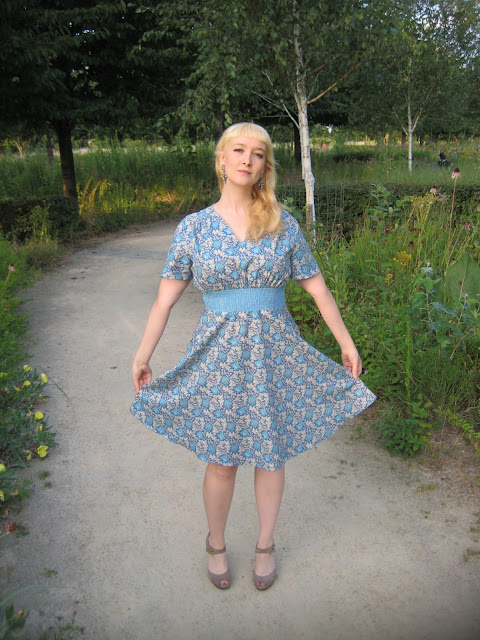 Hi everyone! Sorry for the puns, I just can't help myself. I'm on a bit of a shirring drive at the moment, after making my Staple Dress I was just working through a bodice muslin for Gertie's Shirtwaist Dress when I decided to drop everything and make this. This is the Simple Sew Amelia Tea Dress from Love Sewing Magazine . I bought the magazine on a whim too before boarding a long flight, not really that bothered by making any of the patterns (the sample made up in hot pink satin for this dress is truly hideous . I'm sorry but it's true). The free gift of thread snips have come in very handy for this make, keeping all the ends of my shirring rows neat, and actually I am rather tempted to add the gored skirt pattern, also from the magazine, to my growing list of things to make... I cut the size 14 for this based on the finished garment measurements, which is all the pattern envelope gives you. I think I judged pretty well, although if I was bei 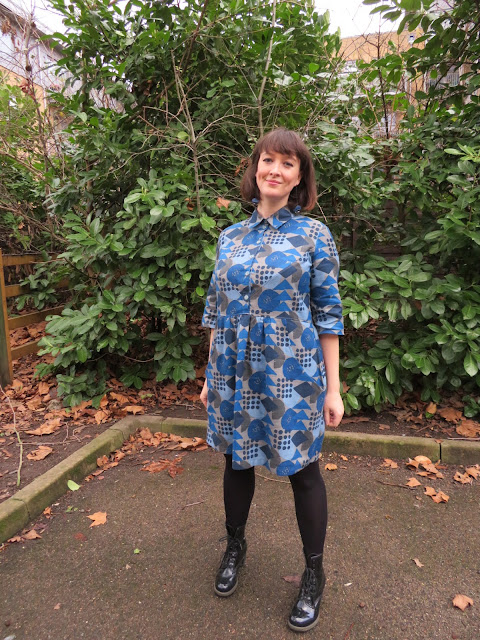 *Disclaimer: I am not an art teacher.  Hi everyone, It's been a while! I notice that a few of the bloggers I follow have cited 'Slow January' as a reason they haven't been posting much and I am on board with that. I was away for most of December visiting friends and family in Canada and the US (my first Christmas abroad!) and have been taking January easy to recalibrate after the all the travel, hectic social schedule, and rich food and drink. I missed sewing a lot and was desperate to get back into it when we arrived back in the UK, but also felt down on my body image after all the indulgence of the weeks abroad. It's taken a while to feel motivated to make something for myself. This is the Isca Shirtdress by Marilla Walker, made in Seasalt fabric I purchased at their shop in Lewes when out antiquing with my mum last Autumn (on a side note she's not impressed with how many of the old treasure troves have been converted to coffee shops - is 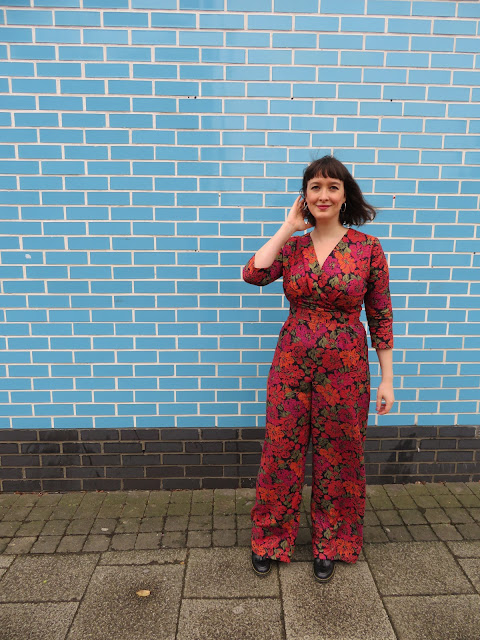 I made my first jumpsuit! And another Work to Weekend Pattern – that’s two back-to-back now (plus I’ve also made the Dana shirt last year but never got pics – maybe it’ll surface at some point when the weather warms up). The Camille Jumpsuit was one of the patterns that pushed me over the edge to click 'purchase' for this e-book pattern package. Although I probably could have put together a package of similar patterns from the Burda Style magazines that I already own, the curated look of the e-book really sold me, and the modelled photos of the Camille jumpsuit look so sophisticated! This blog post is a long read so the short story is - I love this pattern and want to make it work for me, but I still have a way to go with perfecting the fit. Don't you just hate it when your standards don't match up with your skills?! I made up the pattern in this gifted soft brushed cotton, which is so lovely to wear and has a nice drape for the trouser portion o